With the Fed the focus of investors’ attention this week, the central bank by 50 basis points. However, while market participants initially put on brave faces, optimism turned to pessimism as reality re-emerged. To explain, I wrote on May 5:

With investors hitching their wagons to the Fed’s horse on May 4, they still believe that Chairman Jerome Powell can accomplish the impossible. Therefore, it’s all about following the man who will lead you to prosperity.

However, not only did the pair’s medium-term fundamentals not follow suit, they actually worsened. Therefore, while sentiment rules the day in the short term, their medium-term outlooks couldn’t be more treacherous.

Well, with investors’ panic attack turning the medium-term into one day, the and the VanEck Junior Gold Miners ETF (NYSE:) gave back all of their misguided gains and then some.

However, the medium-term outlook remains unchanged and what I wrote on Apr. 27 still stands: while investors will likely remain in ‘buy the dip’ mode until the very end, lower highs and lower lows should confront the S&P 500 and the PMs over the next few months.

Remember, investors are always looking for the bottom. They speculate, hoping that every morsel of bullish news will turn the tide. On May 4, that optimism was underwritten by the relief that the Fed didn’t hike rates by 75 basis points.

However, it’s not about how much the Fed hikes at a given meeting; it’s about how long the rate hike cycle lasts and whether or not the Fed turns dovish. Therefore, with officials stuck between a rock () and a hard place (), bad news should continue to hammer the financial markets for the foreseeable future.

To explain, when analyzing Chairman Jerome Powell’s prediction of a soft landing, I wrote that this statement should go down as one of the most important quotes of 2022:

“I do expect that this will be very challenging; it’s not going to be easy; and it may well depend on events that are not in our control. But our job is to use our tools to try to achieve that outcome, and that’s what we’re going to do.”

As such, with Powell noting that a soft landing “may well depend on events that are not in our control,” he’s essentially telling you that the Fed is past the point of managing this outbreak. In reality, inflation is like cancer. Once it spreads, it reaches a point where too much damage has been done to save the patient.

Thus, this is where we are now. With the Fed’s “blunt tools” poised to inflict serious damage on the U.S. economy, the undesirable trade-off of supporting growth versus curbing inflation has the Fed in a material bind. As a result, investors severely underestimate the challenges that will confront them over the next several months.

Therefore, what should Powell do? On the one hand, he could hammer home rate hikes, kill demand, eviscerate inflation, and push the U.S. economy into recession. On the other hand, he could stop hiking, support growth and let inflation rage.

However, investors don’t realize that both roads lead to the same destination. If Powell is serious about fighting inflation, the end result is pretty clear. If he performs a dovish 180, the S&P 500 and the PMs could bask in the short-term glory.

Yet, the medium-term implications are even more bearish (for the stock market) if the second scenario unfolds.

Letting inflation rage will cripple long-term economic growth and push the U.S. economy into an even deeper recession (with a lag) than if Powell hikes the federal funds rate to 3.5%.

As a result, investors don’t understand that what they cheered for on May 4 (the hope of a dovish Fed) will actually lead to the worst possible long-term outcome. Thus, whether it’s one day, one week, or one month of bullish optimism, the ghost of stimulus past should haunt investors for much of 2022.

To that point, there is a third scenario; and with the bulls desperately searching for a medium-term catalyst, the new narrative from CNBC’s oracle looks like this: 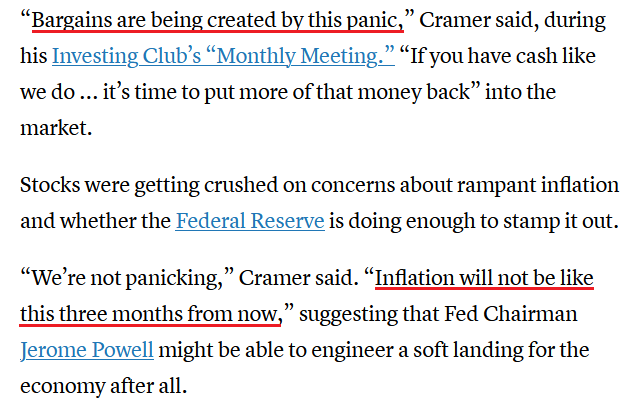 Therefore, when inflation is too high to expect a dovish pivot and the Fed’s “blunt tools” are too harsh to avoid collateral damage, the only bullish narrative left is to predict that inflation will subside on its own.

However, while I’ve been warning since 2021 that the concept is laughable, desperate times call for desperate measures. Furthermore, even if inflation peaks on a year-over-year (YoY) basis, it’s still increasing (MoM). As such, “the fool wonders; the wise man asks.”

So, let’s dig a little deeper than Cramer. On May 5, the U.S. Bureau of Labor Statistics (BLS) released its report. An excerpt read:

Now, this is lagged data, so the future implications are less relevant than PMIs or business surveys. However, the results are still profound.

However, the important point is that productivity offsets wage inflation. When productivity increases, the number of goods one person creates increases, and even if that individual receives a wage increase, the labor cost per unit can remain constant or decline. As such, the company doesn’t need to pass the wage increase on to the consumer.

Second, the CNBC article stated: “Cramer said rising mortgage rates should cool the housing market,” and therefore, help reduce inflation. Now, I agree with the long-term implications of his thinking.

However, his uninformed analysis assumes that housing prices are reflected in the Consumer Price Index (CPI). In reality, shelter (rent inflation+) accounts for more than 30% of the headline CPI’s movement. Therefore, higher mortgage rates won’t impact rent inflation until several months down the road.

“Rent growth is continuing to pick up steam again, after a brief winter cooldown, with our national index up by 0.9 percent over the course of April. So far this year, rents are growing more slowly than they did in 2021, but faster than the growth we observed in the years immediately preceding the pandemic.” 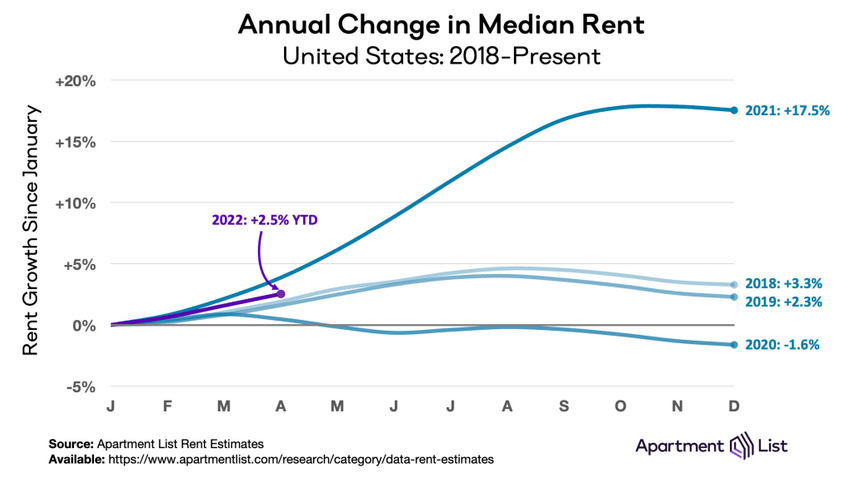 In addition, the spring and summer months are when peak pricing occurs. As a result, the data is extremely bullish for Fed policy.

“As we enter the spring and summer months, rental activity is likely to pick up, and rent growth is likely to accelerate. Despite a recent cool-down, many American renters are likely to remain burdened throughout 2022 by historically high housing costs.”

Finally, S&P Global released its U.S. on May 4. The report revealed:

“U.S. service providers recorded a steep expansion in business activity during April, according to the latest PMI™ data. The rate of output growth eased to the slowest for three months but was sharp overall…. Demand conditions remained strong and sparked the fastest rise in employment for a year as backlogs mounted at a near-record pace.”

Moreover, the data mirrors the results from S&P Global’s U.S. released on May 2:

Also noteworthy, I wrote on May 4 that the Treasury yield has continued its ascent, [and] while the Treasury benchmark eclipsed 3% intraday on May 3, a close above the key psychological level should occur sooner rather than later.

The bottom line? While it’s surprising how CNBC personalities will say things without doing their homework, the Fed’s reality check still has room to run. Moreover, I warned on Mar. 28 that investors’ confidence would eventually cower. I wrote:

The PMs and the general stock market remain in la-la land. Despite repeated warnings from Fed officials and a rout in the bond market, both asset classes continue to ignore the potential ramifications. However, with the medium term likely to elicit a profound shift in sentiment, the Fed’s war on inflation should send shockwaves across the financial markets.

As a result, while investors slowly realize the implications of the Fed’s catch-22, plenty of downside is needed before the medium-term effects are accurately priced in.

In conclusion, the PMs were mixed on May 5, as mining stocks suffered the brunt of the damage. However, with the Fed on a hawkish warpath and the medium-term outlooks bullish for the and real yields, the PMs should confront more selling pressure before long-term buying opportunities emerge.

Please note that a short-term buying opportunity may present itself if certain technical developments materialize in the coming days.

What To Watch For Next Week

With more U.S. economic data releases next week, the most important are as follows:

With employment making up one-half of the Fed’s dual mandate, continued strength in the U.S. labor market could add more fuel to the hawkish fire.

With small businesses having a material impact on U.S. employment and inflation, it will be interesting to see if employers continue to increase staff and raise prices.

Although it’s lagged data, outperformance and underperformance often move markets. As a result, the CPI will likely be the most watched data point next week.

With the PPI often leading the CPI, the former is an important component of the inflation story.

With consumers dealing with rising mortgage rates and unrelenting inflation, it will be interesting to see how sentiment is holding up.

All in all, economic data releases impact the PMs because they impact monetary policy. Moreover, if we continue to see higher employment and inflation, the Fed should keep its foot on the hawkish accelerator. If that occurs, the outcome is profoundly bearish for the PMs.