Home » Why Southeast Asia Lags Behind In The Global Economic Recovery

Why Southeast Asia Lags Behind In The Global Economic Recovery

Over the last several decades, Southeast Asia was a synonym for economic dynamism, opportunity, and growth. This was the case particularly with the six largest economies of the Association of Southeast Asian Nations (ASEAN-6), including Indonesia, Thailand, Singapore, Malaysia, Vietnam, and the Philippines.

In fact, ASEAN-6 economies have been outperforming most other countries when it comes to GDP expansion and other activity metrics until the beginning of 2020.

However, this multi-decade picture has changed markedly with the turnaround brought by the COVID-19 pandemic. Following the shock caused by the global spread of COVID-19, ASEAN-6 countries became laggards rather than leaders in terms of short-term economic performance.

Advanced economies underwent a rapid recovery from the pandemic. This year, or around two years from the height of the pandemic shock, when activity sunk into a deep downturn, the and the are already expecting to be at or significantly above their pre-pandemic GDP trend.

In contrast, the majority of ASEAN-6 economies are still well below their pre-pandemic trend. The only notable exception is , which had a smaller shock from the pandemic due to effective policies to contain the virus spread in 2020 and also benefitted from a strong global demand for manufacturing products.

Current Vs Pre-Pandemic Estimates For GDP In 2022

Importantly, the growth differentials between ASEAN-6 and advanced economies turned negative in 2021 and are still expected to be significantly below historical norms in 2022 compared to their growth forecasts in 2019 for 2022, had the pandemic not occurred.

The differentials plummeted from 289 basis points (bps) over the decade before the pandemic to around 98 bps expected for this year, after dipping into negative territory last year. This means that, on average in 2021, ASEAN-6 countries are growing only around 1% faster than advanced economies, instead of the usual 2.89% of outperformance.

Narrower growth differentials point to a slower catch up or growth convergence towards the higher levels of economic output, productivity, and standards of living found in advanced economies. 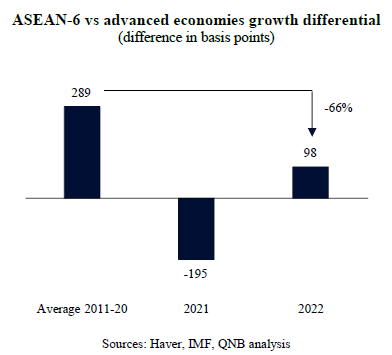 In our view, three factors explain the recent weak performance of ASEAN-6 countries.

First, different vaccination rates between ASEAN-6 and advanced economies are playing a part on the pace of the recovery. Vaccination programs have progressed remarkably in advanced economies since early 2021, while the rollout of vaccines started at a slower rate in ASEAN-6.

This led ASEAN-6 to be more vulnerable to more infectious COVID-19 variants, such as Delta. Virus outbreaks and the need to respond to them required several rounds of harder social distancing measures in ASEAN-6, preventing a stable recovery and creating an unhelpful “stop and go” activity pattern. Omicron, while even more infectious than Delta, has so far only led to light touch mobility restrictions in ASEAN-6.

Second, the current change in relative economic performance from historical norms between ASEAN-6 and advanced economies is associated with different monetary and fiscal policy space. ASEAN-6, and particularly middle- and lower-income countries, have less policy space to stimulate their economies during a downturn.

With weaker economic institutions and smaller capital bases to tap into, most ASEAN-6 countries did not have the resources to support their households and corporates the same way that the more advanced economies did. Hence, while economic authorities protected the balance sheet of the private sector from the pandemic crisis in advanced economies, the same did not apply across ASEAN-6.

As a result, a more affected private sector in ASEAN-6 countries will take longer to return to pre-pandemic levels of consumption and investment than their peers in advanced economies. In other words, the private sector in advanced economies was boosted with both spending and savings after the pandemic, due to the large windfall from government transfers and other policy benefits.

In contrast, the private sector in ASEAN-6 countries, facing higher levels of uncertainty and less policy support, tightened their spending and in some cases even tapped into their savings to cover income losses.

Third, the slowdown in China is a particularly strong headwind to ASEAN-6 countries, due to their direct and indirect trade and financial links. Chinese growth has a high multiplying effect, often spilling over globally and to the ASEAN-6 countries. This is the case particularly when it comes to the export-oriented manufacturers of “Factory Asia,” such as Thailand, Malaysia, and Vietnam, and commodity producers, such as Indonesia, Malaysia, and the Philippines.

Thus, the current slowdown of growth in China, precipitated by a significant tightening in monetary, fiscal and regulatory policies, indirectly affected the economic performance of ASEAN-6. growth slid from over 18% year-on-year (y/y) at its peak in Q1 2021 to 4% in . This forms a materially negative backdrop for growth in ASEAN-6.

All in all, a slower start to massive immunization, less policy stimulus with less spending, investments and savings as well as a slowing China explain the current period of underperformance in ASEAN-6. However, we expect this phenomenon to be short-lived.

The causes for the difference in performance over the past several quarters are already starting to erode. Vaccination programs gained momentum in Emerging Asia, advanced economies started to tighten policies and China signaled that it is willing to slowly stimulate more its economy. Therefore, the relative performance should start to converge back to historical norms in 2023 and 2024.