Home » What The Russian Invasion Of Ukraine Means For The Market

What The Russian Invasion Of Ukraine Means For The Market

The Market Bottoms In Wake Of Ukraine Invasion

As dire as the news from Ukraine and Russia is, the selloff in equities sparked by the crisis appears to have already hit bottom. The fell more than 2.0% on the news to extend its selloff to over 13.5%, but hit a bottom and reclaimed all of the loss and more by the end of the session.

The key takeaway is that this bottom is unrelated to the underlying factors driving the market which include and its impact on earnings. As for Ukraine and Russia, the near-term impact will be to drive inflation via supply chain disruption and higher prices. That will increase the pressure on S&P 500 margins which means the market correction is probably not over.

Oil Breaks To New High On Russia Aggression In Ukraine

prices (NYSE:) broke out to a new high following the Russian invasion of Ukraine. The spike was driven by fear of tightening supply and the possibility Putin could weaponize its fuel deliveries to western Europe. The price of WTI spiked more than 7% on the news and could move higher although the technical picture is still murky.

The spike in price was met by sellers and profit-takers who were able to drive it back down to the previous day’s close. The candle formed is a large doji candle at the top of an uptrend and may qualify as a Tombstone or Shooting Star.

If the oil market cannot maintain these levels and begins to fall, the oil price may enter a correction, but that is not supported by the fundamental outlook. The supply and demand outlook for this year is tight and was supporting the rise in oil even before the Ukrainian crisis began to emerge.

The more likely scenario is that oil will pull back slightly and/or consolidate at the current level until other news arises. That may be an increase/decrease of tensions in Europe, oil supply data, or other economic data. Regardless, oil is trading at a 7-year high which means added pressure to inflation and windfall profits for the .

The Real Risk For The S&P 500 Is Earnings

This was leading to a downward trend in the consensus for earnings estimates and that was what was ultimately reading the market lower. If this trend continues, no amount of good news from Ukraine will support the index. With oil prices on the rise and supply chains still in turmoil, we do not expect this trend to end.

Turning to the charts, the price action in the S&P 500 was indicative of a bottom but the question was if the index will reverse course and begin marching higher, or if this was just the prelude to another decline. The primary indication of bottoming lay in the doji candle which formed with the day’s action and the indicators which were both showing significant divergence from the new lows. This combination had a high likelihood of resulting in a rebound but that does not mean reversal.

The key level for the market to watch would be the 4,300 support line that was just broken because it may turn into resistance. If the index can not regain the upper side of 4,300 within the next few days, there was a near 100% chance the S&P 500 will retest the new lows and may even set a new lower low. 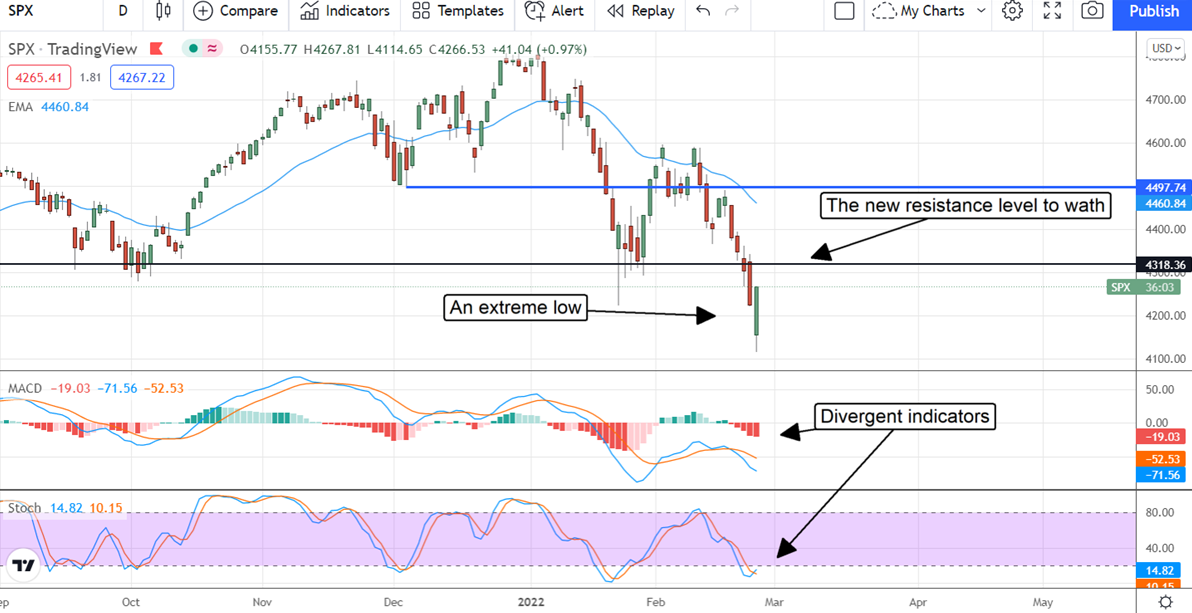