Treasury Bears Still Have The Advantage

Our forecast for bonds last September has held up very well, as did the forecast before that one. Here, we revisit treasuries via the iShares 20+ Year Treasury Bond ETF (NASDAQ:). We expect continuation downward.

Our previous post was written just as TLT was retesting a resistance area at the brief high candle a few weeks after wave (A) of ‘iv’ on the chart. After a moderate pullback, price went on to test our next higher resistance area at 154.35, where it was rejected.

We suggested that a weekly close beneath 146.35 would represent confirmation of the bearish scenario, and we see that price accelerated when that support first broke. 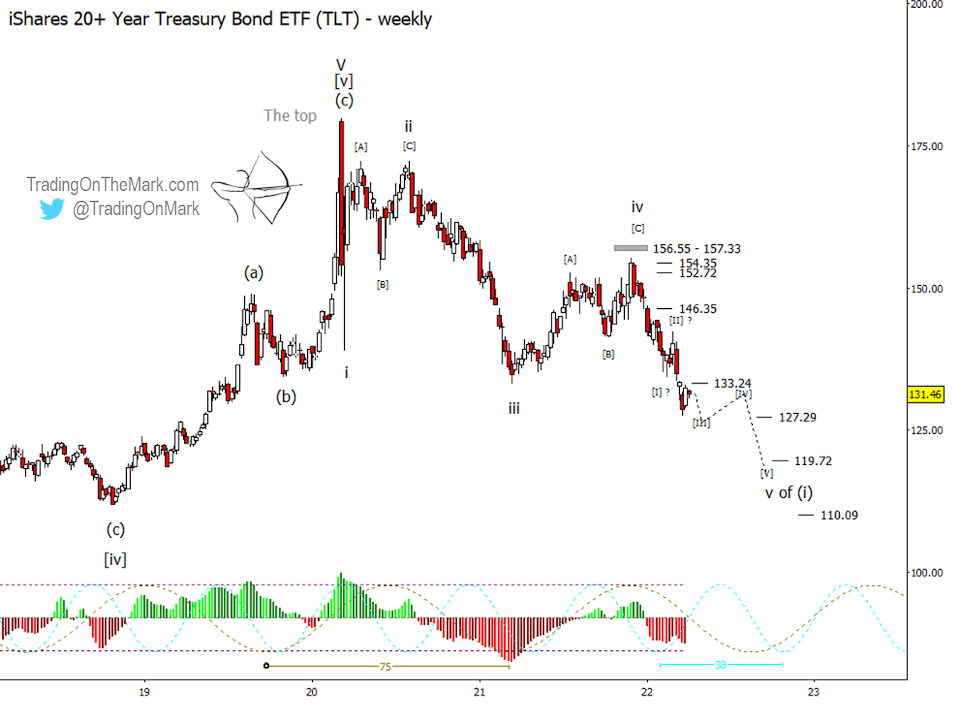 Looking forward, we expect an impulsive (5-wave) pattern down from the peak of wave ‘iv’. We have drawn one possible way price could wind through the nearby support/resistance levels at 133.24, 127.29, 119.72 and 110.09, calculated using a Fibonacci-based technique.

A downward impulse would comprise the first wave of some larger pattern, which might end up being labelled as (i) or (a).

It also makes sense to consider the two dominant price/time cycles of 75 weeks and 33 weeks as you try to predict where the current decline will stop. Keep in mind that sometimes the inflection of the cycle is more important than whether it’s happening at a cycle high or low.

Because the easiest part of the trade is probably over, bond traders should make sure their style is well suited to work on a faster time frame here. Those holding bearish positions might consider the support levels as opportunities for profit-taking, depending on how the wave counts progress as we go forward.