On the technical front, we saw that the VanEck Junior Gold Miners ETF (NYSE:) – once again – moved higher in the first part of the session. Unlike Monday’s session, yesterday’s one was followed by a move well below the opening price. Ultimately, junior miners ended the day more than 3% lower.

In yesterday’s analysis, I wrote that junior miners were likely to decline, and they did.

However, why did junior miners rally initially? Perhaps for technical reasons. They were moving higher in their immediate-term trend, and thus, it might have been necessary for them to reach a resistance level before they could return to their downtrend. That’s likely the same reason why they rallied early in the day on Monday, but it seems that Monday’s session wasn’t convincing enough and the bulls wanted to give the breakout another shot. It failed too.

Junior miners just found the resistance in the form of the declining line based on the previous March highs. After a tiny attempt to break above this line, the GDXJ declined and the breakout was invalidated, suggesting that the rally is over.

Now, the above-mentioned resistance line appears to be the upper border of the triangle pattern, which might concern you because triangles are usually a “continuation pattern”. In other words, the move that preceded the triangle is usually the type of move that follows it. The preceding move higher was up, so the following move could be to the upside as well.

If – instead – we see a decline below the lower border of the triangle, the pattern would likely be followed by a decline. Please note that I wrote “usually” and now “always” with regard to the bullish implications of triangles.

If we look beyond the above chart, the bearish case is more justified than the bullish one.

I don’t mean just the extremely bearish situation in gold’s long-term chart, where it’s clear that gold is repeating its 2011-2013 performance, with the recent top being analogous to what we saw in 2012. 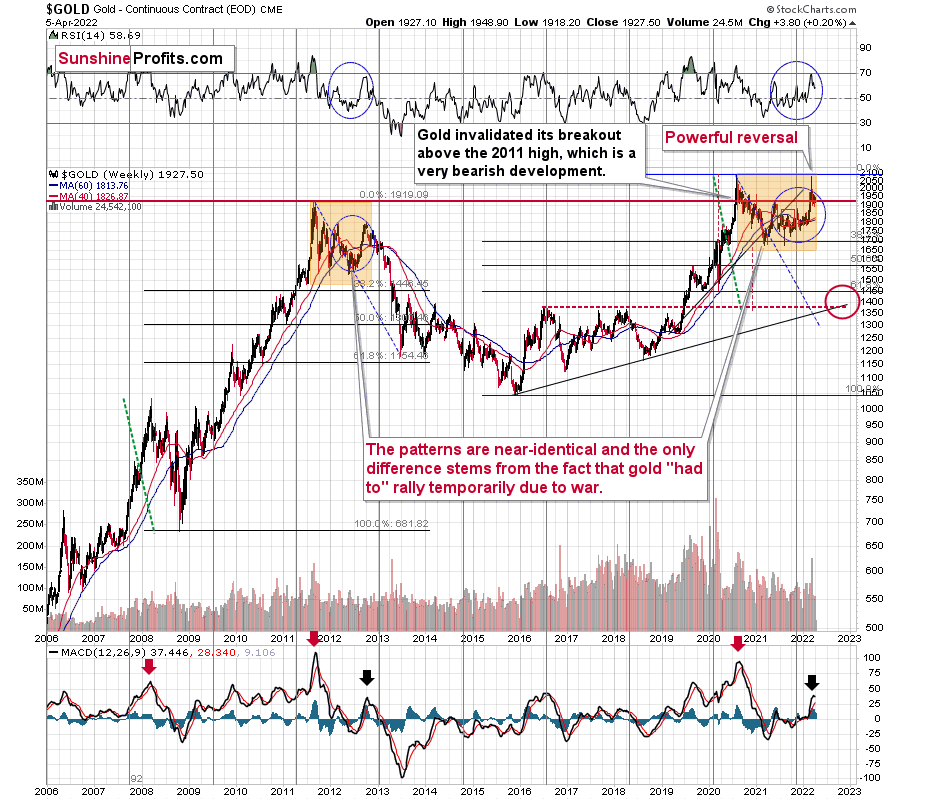 If it wasn’t for the Ukraine-war-tension-based rally, gold would have likely topped close to its current levels, which would be a perfect analogy to where it topped in 2012 – close to its preceding medium-term highs.

The fact that the RSI indicator moved lower recently after being close to 70 indicates that the top is already behind us.

If history is about to rhyme (and that’s very probable in my view), gold is likely to decline in a back-and-forth manner before it truly slides without looking back. Basically, that’s what we’ve been seeing recently. The recent consolidation is not a bullish development, but something in perfect tune with the extremely bearish pattern from 2012.

I don’t mean “just” the above, because we see similar analogies in and gold stocks (the Index), and we get other indications (of more short-term nature) from the USD Index and the general stock market.

Before we get to them, let’s check gold’s short-term chart. 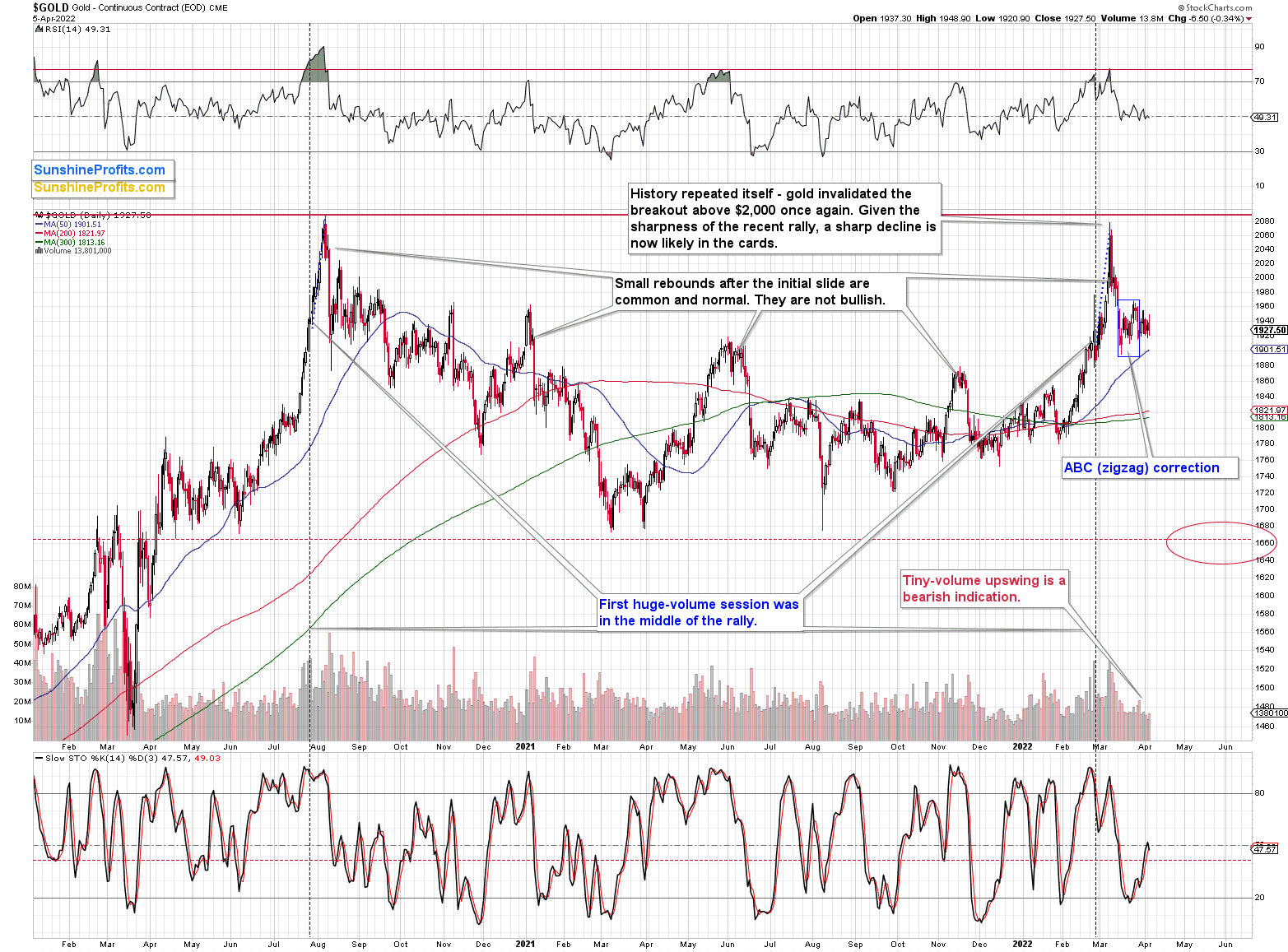 In short, it’s consolidating, which is in perfect tune with what we saw after the previous (unsuccessful) attempt to break above $2,000 – in 2020. Back then, the volatility was bigger, but the pre-top rally itself was also much higher. Overall, it seems that both situations are analogous.

With the breaking to new highs, it seems that gold is ready to fall lower once again. Speaking of the U.S. currency, let’s take a look at its chart. 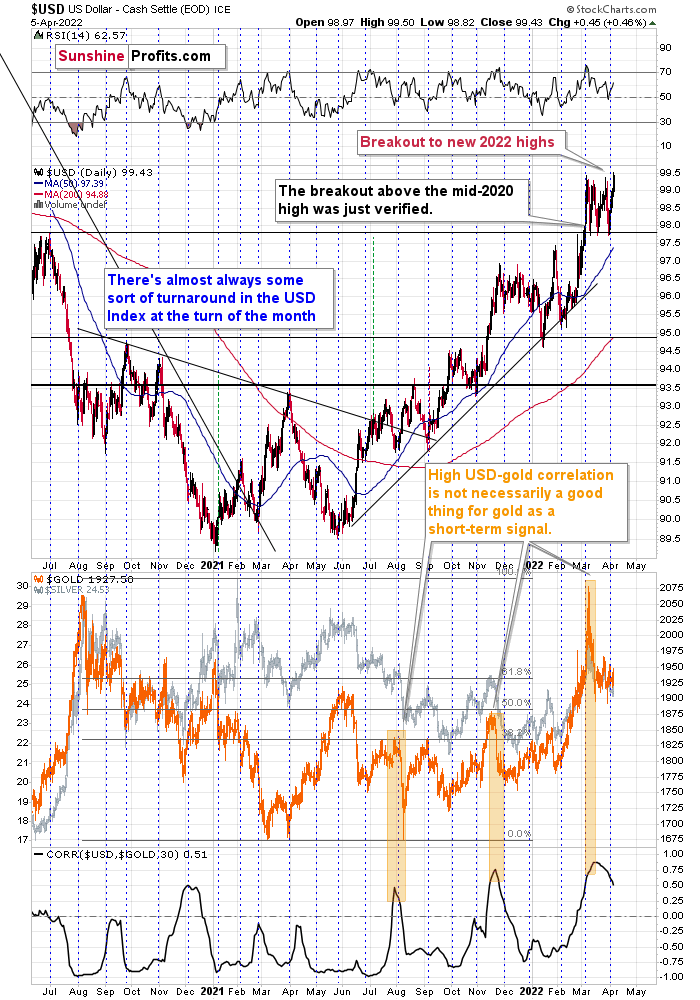 In my previous analyses, I commented on the USD Index in the following way:

If we focus on the USD Index alone, we’ll see that yesterday’s decline was absolutely inconsequential with regard to changing the outlook for the USDX. It simply continues to consolidate after a breakout above the mid-2020 highs. Breakout + consolidation = increasing chances of rallies’ continuation. A big wave up in the USD Index is likely just around the corner, and the precious metal sector is likely to decline when it materializes.

As the war-based premiums in gold and the USD appear to be waning, a high-interest-rate-driven rally in the USD is likely to trigger declines in gold. The correlation between these two assets has started to decline. When that happened during the last two cases (marked with orange), gold plummeted profoundly shortly thereafter.

The USD Index rallied recently, once again clearly verifying the breakout above its mid-2020 high. This means that the USD Index is now likely ready to rally once again. Naturally, this has bearish implications for the precious metals sector.

Indeed – the USD Index has rallied, and it just moved to its new 2022 highs. What’s not visible on the above chart is that the rally continued in today’s pre-market movement. At the moment of writing these words, the USD Index futures are trading at about 99.7. Once the USD Index moves above 100, it will likely get media’s attention, which means that many more people will realize what’s going on.

What’s going on is that the USDX has been on the rise since early 2021 – when everyone (well, not you, if you’ve been following my analyses at that time) thought that the USD Index was about to collapse.

This renewed bullish sentiment is likely to keep precious metals prices in check and perhaps trigger another big wave down.

Meanwhile, the technical picture of the continues to suggest that the final top and the initial corrective upswing are over. 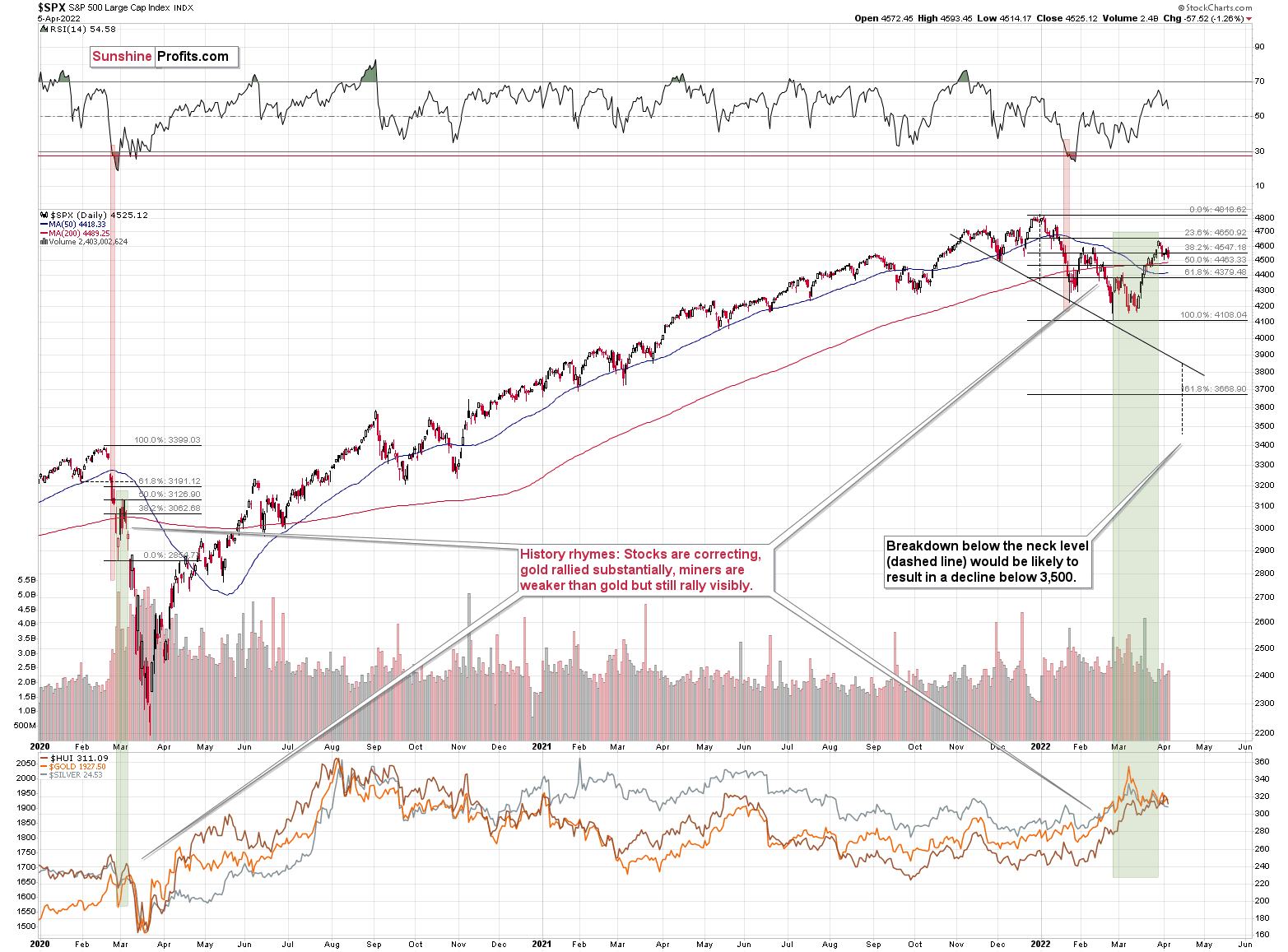 The general stock market closed the previous week below its February highs, which means that the small breakout above them was invalidated.

It also closed yesterday’s session lower, indicating that another short-term rally is about to take place.

This is a very bearish indication for the following weeks. Many more investors are likely to become aware of the new interest-rate-hike-driven medium-term bear market once the S&P 500 breaks to its new 2022 lows. That’s when the decline is supposed to accelerate, quite likely also in silver and mining stocks that are usually most vulnerable to stock market moves.

All in all, technicals favor a decline in the precious metals sector sooner rather than later.