Recall prior to what now sadly is occurring, we were seeking (given Gold’s “terrible technicals”) a modest down run from January’s closing Gold price of 1798 toward the 1754 area.

Since then however, especially given this past week’s unconscionable state of affairs, the last several editions of The Gold Update have emphasized ‘s chronicled nature at the onset of geo-political turmoil for price to rise, only to then fall back from whence it came as events further unfold. And as horrifically senseless as is Russia’s waging war on Ukraine — wherein lives are comprehensively more important than the price of any market — we are sensitive to Gold perhaps now repeating such historical pattern of “Price spike and fade”.

■ The blue line represents Gold eight years ago from 21 February 2014 at the onset of Russia moving into then Ukraine’s Crimean Peninsula; not six weeks later with the incursion irreversible, Gold regardless was lower come 01 April of that year;

■ The red line represents Gold this year since 31 January upon the first serious stirrings for Russia again invading Ukraine. Note the directional similarity of the red line-to-date with the blue line back during the 2014 offensive:

No one knows how ’twill all go, but specific to Gold, the two performance tracks’ similarity is stunning, and moreover is suggestive that Gold’s geo-political run is done, the red line now keeling over nearly in sync with the blue line of eight years ago. On verra…

In no way making light of the matter, Saturday morning greetings from culturally war-torn San Francisco, “a magnificent city that is dying” –[M.R.L.]. And with time at a premium given our being “in motion” — combined with it being month-end (save for one trading day) — let’s get straightaway to our cavalcade of graphics, beginning with Gold’s weekly bars from this time a year ago-to-date. The rightmost bar really emphasizes price’s spike upon Russia materially moving into Ukraine, propelling Gold to as high as 1977, a level not traded since 16 September 2020. And yet come Friday’s settle at 1890, Gold not only recorded a net loss for the week, but in fact its fourth-worst weekly high-to-low blow (-5.0%) since Thanksgiving Week back in 2020: 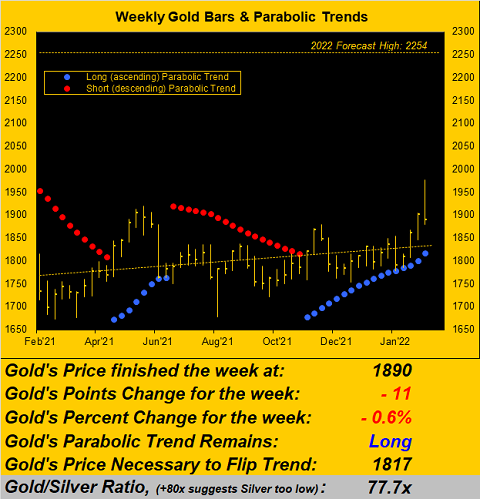 As well from a year ago-to-date, here we’ve the percentage tracks of Gold along with those of its high-level equities. And ’tis quite a spread of performance with Franco-Nevada ((NYSE:) +37%, Newmont (NYSE:) +25%, the VanEck Vectors Gold Miners exchange-traded fund (NYSE:) +10%, Gold itself +9%, Agnico Eagle Mines (NYSE:) -7%, the Global X Silver Miners exchange-traded fund (NYSE:) -16%, and Pan American Silver (NASDAQ:) -29%. Clearly the Silvers have underperformed Gold, the Gold/ on this date a year ago at 64.9x, but today (as depicted at the foot of the above graphic) at 77.7x. Poor ole Sister Silver! Here are the tracks: 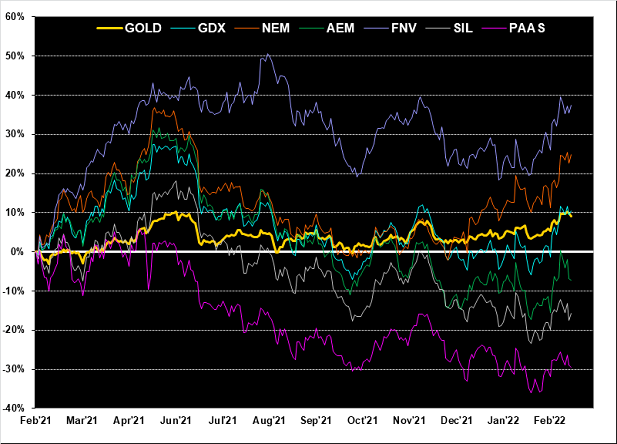 Collectively for the BEGOS Markets, next we’ve their year-to-date percentage changes, the podium dominated by Oil, along with (to a much lesser degree) the precious metals. The cellar dweller is the , its -8% slip seemingly mild given that from here (4385 and a “live” price/earnings ratio of 35.3x), should earnings not grow, price “ought” fall to 2778 (an additional -37%) just to revert the P/E to its historical mean (now 22.3x, in case you’re scoring at home). And rising interest rates as the economy stagflates means the stock market deflates:

Let’s too go ’round the horn as we do each month-end for the BEGOS Markets, the daily bars being for the past 21 trading days, with their respective grey diagonal regression trendlines and baby blue dots denoting the consistency of those trends, of which notably for Gold and Silver have been our friends, albeit not for the preferred reason: 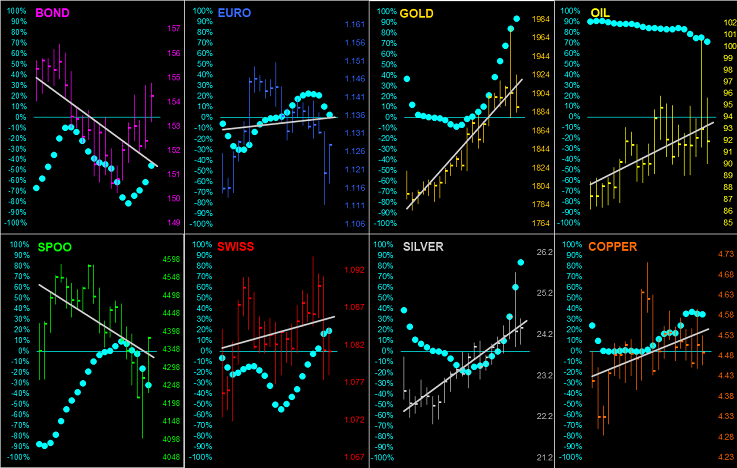 That stated, over the years we’ve put forth that Gold “ought” rise in tandem with currency debasement, which it did magnificently through the first decade of this 21st Century. And obviously by the opening Gold Scoreboard, Gold is priced today at but one half its valuation. We do not relish Gold rising on geo-political events, the worst of which is war. However, repulsive as that is, we’re detecting (to use a modern-day wokey word) a renewed Gold “awareness”. To be sure, repugnant as ’tis, “everybody says” that the Russian invasion of Ukraine has kept Gold’s price aloft. But “everybody says” also now that ’tis not just the war boosting Gold. Well, “everybody” may be a bit of an exaggeration, but: the buzz today is that Gold ought be higher anyway because of … (wait for it) … “inflation and all the money that’s been printed.” Did “everybody” just figure that out now? We’re not holding our breath, but: should price continue to beat a near-term retreat, 1854-1779 shows as structural support from which our 2254 forecast high for this year may indeed well appear.

In fact, to really push the envelope to the brink here, the “Trade of Trades” as we see it is to be Long Gold and Short the S&P; (but ’tis that darn “when” which perennially seems in the way).

Now for the StateSide economy, Dow Jones Newswires just ran with this headline “Why This Economic Boom Can’t Lift America’s Spirits”. To what “boom” do they refer? We don’t see one here:

Meanwhile, the Federal Reserve pie-fights continue, (except when it really counts given the Open Market Committee continues to vote unanimously). Either way, New York FedPrez John “It’s All Good” Williams (amongst others) inferred this past week that a +0.25% rate hike to kick off The Great Rise ought be sufficient (as opposed to +0.50%). Counter to that, both FedGovs Michelle “Miki” Bowman and Christopher “Up The” Waller are in the +0.50% hike camp, the latter seeing inflation as “alarmingly high”. And not to be left off the poker table, on the heels of calls for three rate hikes — and then seven — JPMorgan has now upped the ante to nine, (but not all in 2022). Still got stock? Good luck.

We’ll stick with Gold and Silver. For which next we’ve their 10-day Market Profiles, the yellow metal being on the left and the white metal on the right, both well off their geo-politically-induced highs: 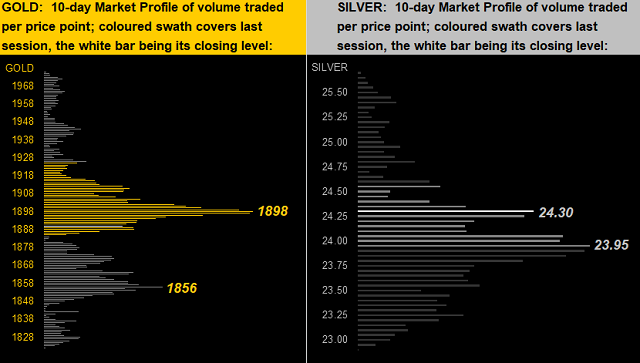 To round it out for month-end (with Monday still in the balance), here is our broad-based structural chart for Gold by its monthly bars across these last dozen years. The rightmost months of generally “higher lows” is encouraging toward mitigating the rampant debasement of the Dollar. Might Gold tap the blue line high with 10 months remaining in 2022? As detailed a week ago, such Gold price-rise distances have been achieved within like time stints: 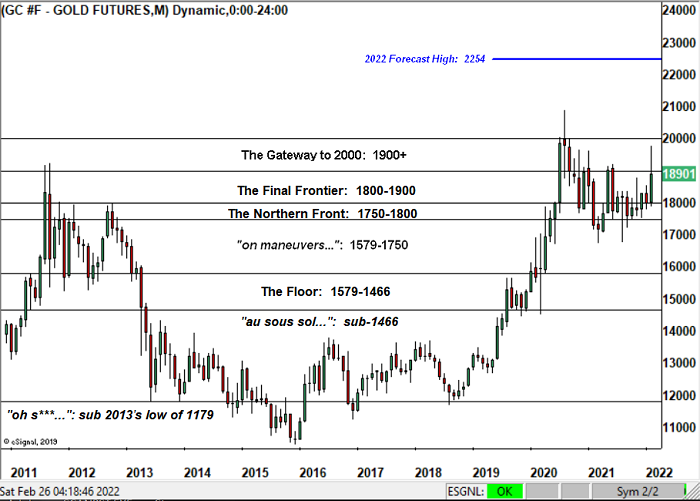 Next week brings us the StateSide President’s State of the Union Address, plus the Fed’s Tan Tome and February’s jobs data. The key unknown remains the state (or lack thereof) of sanity with respect to the war. Stay with your Gold as it all doth unfold, and take care.