On Monday, as trading opened for the week, investors immediately sold off US futures for the , , and , along with European stocks and even bonds, in response to SWIFT sanctions targeting Russian financial institutions.

Markets have been roiled by the escalating conflict in Ukraine and additional, more severe sanctions from the West. The ongoing hostilities are putting essential commodity supplies, including grain, energy, and metals at risk, which could worsen the pandemic-era inflation levels that were already weighing on the global economy.

This development the US Federal Reserve’s plans for a series of interest rate hikes which many believe will start in March. Investors have repositioned bets on aggressive hikes and are now anticipating just under six in 2022.

This morning, all four major US equity contracts were over 1% in the red while European stocks fell after the EU, US, UK, and Canada announced additional sanctions against Russia.

The index opened 0.6% lower. There were only sellers and the drop extended to 1.55% as of the time of writing. While geopolitics has been the apparent driver of price activity, technicals are also playing their part.

On Friday, the pan-European benchmark rebound stopped precisely on the trend line connecting the lows since July, which we’d as a top.

European financials took the brunt of today’s selloffs as the Western allies said they’d block some Russian banks from the SWIFT messaging system. Austria’s Raiffeisen Bank (VIE:) opened 14.65% lower and extended the plunge to as much as 18.67%, its lowest level since November 2020. 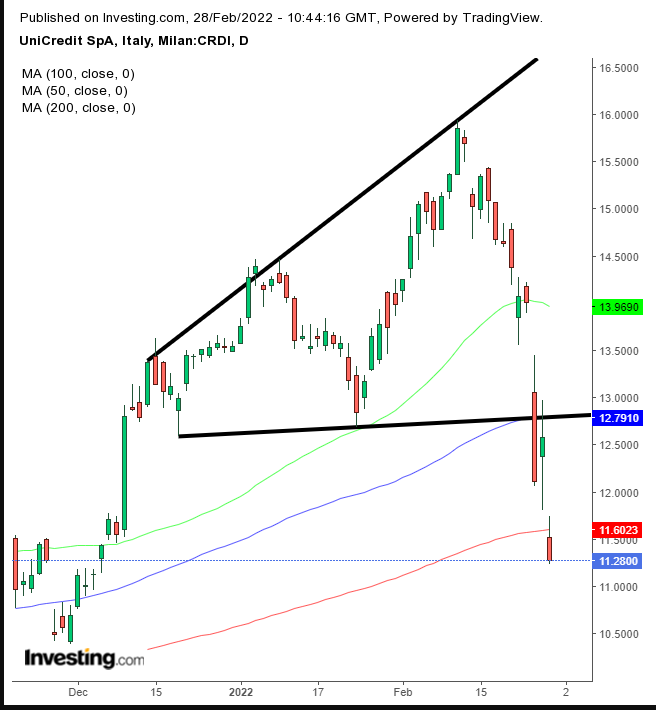 The price blew out an ascending triangle, turning a bullish pattern bearish. France’s Societe Generale (PA:) opened 5.82% down and doubled the crash to 10.21% intraday, with the stock trading at its lowest point so far during the session. Like UniCredit, Societe Generale recently blew out an Ascending Triangle.

We see a pattern of financial institutions moving into bear markets as monetary policy tightens, which is typically when they lead the market into a rally. Overall, the eurozone banking index declined by 5.2% today alone.

Conversely, German defense company Rheinmetall (DE:) catapulted 43.15% at the open after the country’s Chancellor, Olaf Scholz, announced on Sunday that Germany would increase its defense spending to more than 2% of GDP. However, after RHMG rose as much as 47.57%, traders took profit, allowing the price to ease to +27.5% at the time of writing.

The ‘s collapse continued, diving 8% at the open in Moscow, as Russians lined up at ATMs to withdraw foreign currencies on concerns their own currency would completely crater.

After the opening plunge, the ruble’s slide accelerated, losing as much as 31.5% of its value and settling at a 21.58% loss at the time of writing, completing its .

In London, BP (LON:) announced it will exit its stake in Rosneft (LON:), Russia’s largest oil company, risking as much as a $25 billion loss. Norway plans to excise Russian assets from its $1.3 trillion sovereign wealth fund.

Earlier, most Asian shares rose, as regional markets were not directly impacted by European sanctions on Russia. South Korea’s rose 0.84% on the market narrative that Russia and Ukraine would begin peace talks. However, Ukraine’s President Volodymyr Zelenskyy expressed skepticism regarding the talks.

Hong Kong’s was the only major regional benchmark in the red. However, that was due to the fact the city is battling a worsening COVID outbreak.

Treasury yields fluctuated, including on the note. Rates were higher at the time of writing, as investors sold off bonds, despite risk-off sentiment permeating global markets. 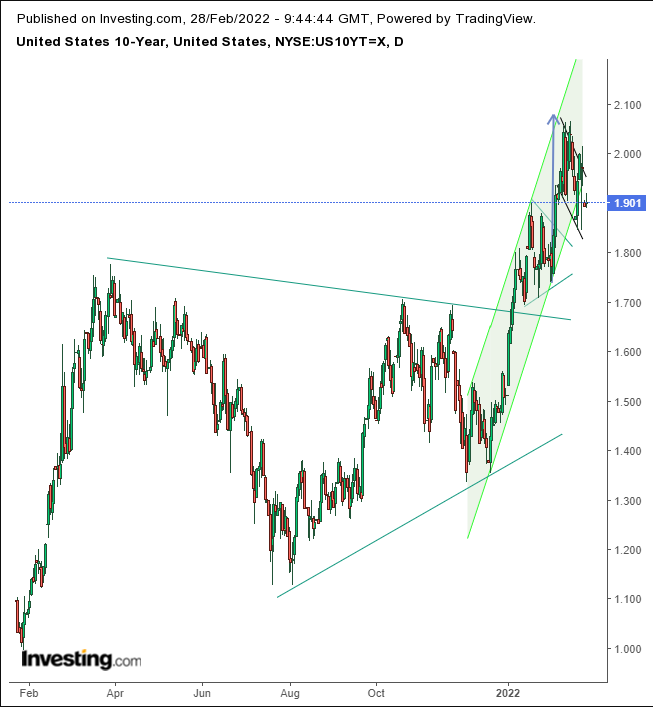 Yields are within a potential back-to-tack continuation pattern following a symmetrical triangle, suggesting rates will rise which is attracting investors away from the equity market.

The opened higher and whipsawed but has remained in the green. 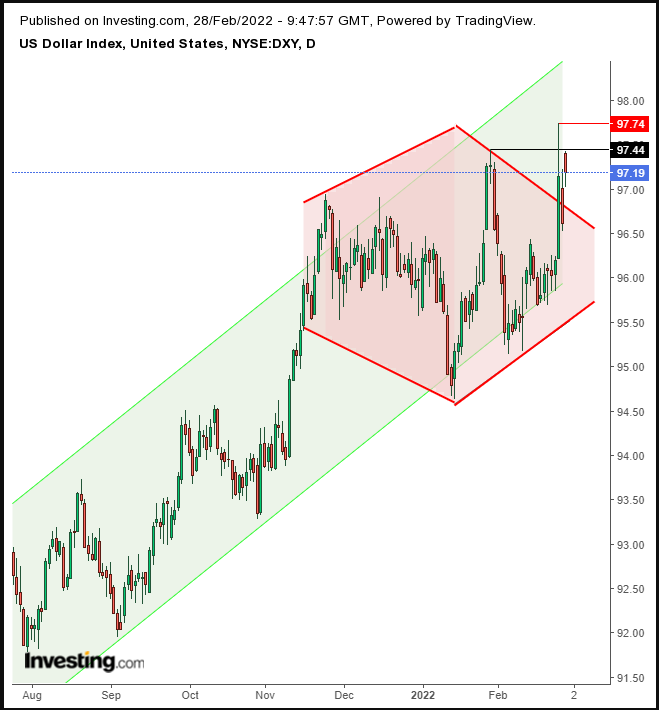 The USD appeared to blow out a potential Diamond pattern, which tends to develop at tops. We would feel more comfortable taking a bullish stance, from a technical perspective if the price closes above its Feb. 24 high of 97.74, but at least above the 97.44, Jan. 28 high.

retreated from session highs but was still higher than Friday’s close, after gapping higher at Sunday evening’s open before retreating somewhat. 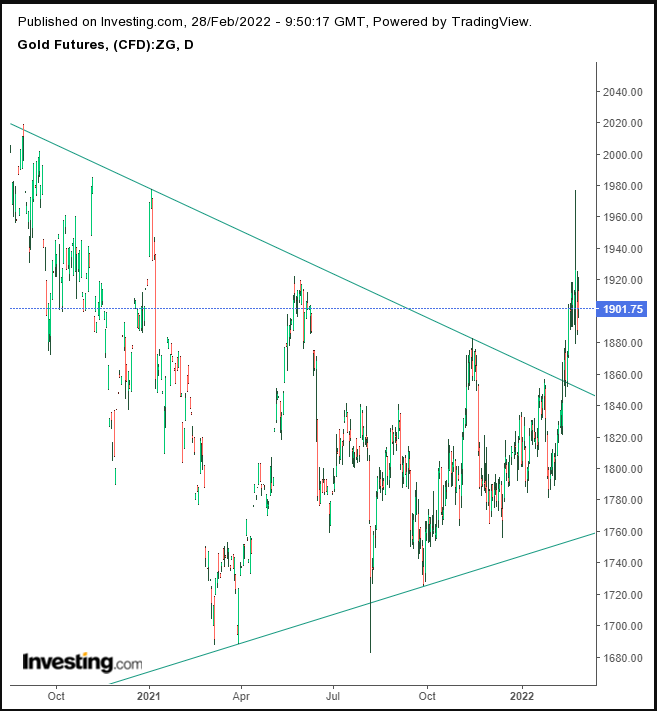 Technically, the yellow metal has had an upside breakout of a large symmetrical triangle which was in play all of last year, suggesting a retest of the August 2020 record peak.

rose, but we still the cryptocurrency to fall toward the $30K level, at least. 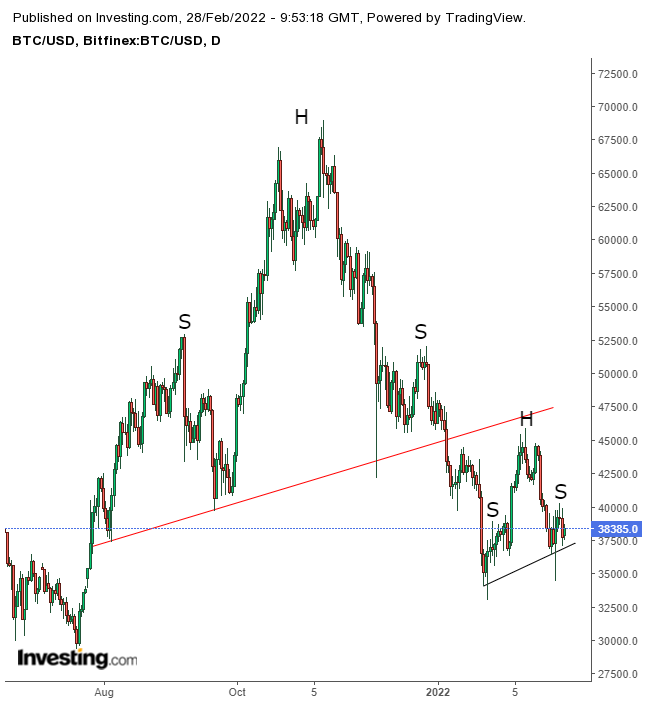 The digital token appears to be developing a small H&S continuation pattern to continue the more oversized H&S top work.

opened 6% higher but pared its gains. The along with other commodities on fears of supply disruptions.

Shipowners who transport oil are demanding sharply higher rates to handle Russian crude, leaving buyers desperately searching for replacement cargo from the Middle East and US. 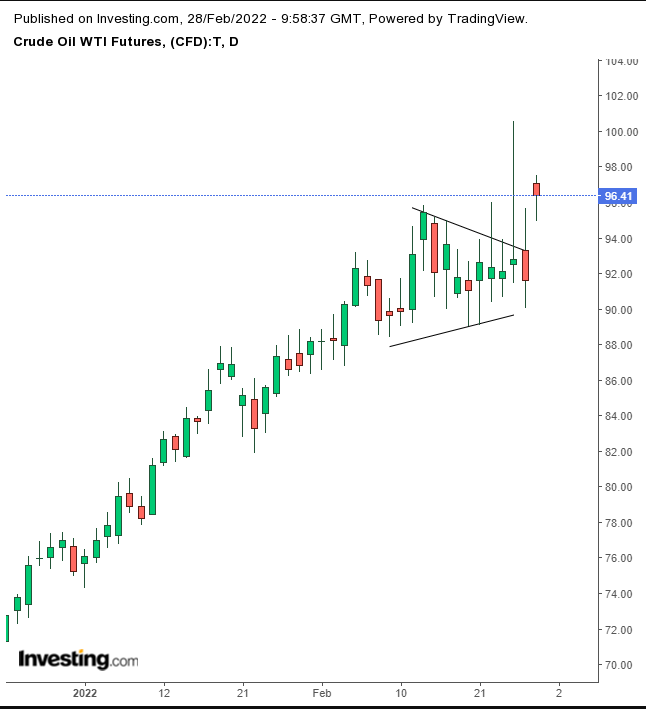 WTI completed a pennant which is promising to test the psychologically round $100 price per barrel for the first time since July 2014.