Although the continued to slide yesterday, it lost the most ground against the safe-havens and this time around. At the same time, equities turned south, as several Fed officials added to the likelihood of a March rate increase and left the door open for more lift-offs than previously assumed.

The US dollar continued trading lower against all the other major currencies yesterday and today in Asia. However, this time around, the leading gainers were JPY and CHF, while the currencies that eked out the least gains were and .

Despite a weaker dollar, the strengthening of the Japanese yen and the Swiss franc, combined with the relative weakening of the risk-linked Aussie and , suggests that markets may have turned back to risk-off at some point yesterday.

Indeed, turning our gaze to the equity world, we see that, although the majority of EU indices closed in positive territory, Wall Street tumbled, with the tech-heavy losing the most (2.51%). The negative appetite rolled over into the Asia session today as well. 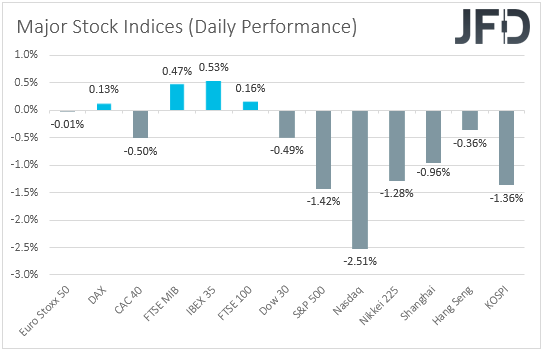 The main market driver was once again comments surrounding the Fed’s future course of action regarding monetary policy. Yesterday, while testifying before the Senate Banking Committee on her nomination as Fed Vice Chair, Governor said the Fed “has projected several rate hikes over the year,” and that they will be able to start doing son “as soon as our purchases are terminated,” referring to QE tapering which is scheduled to end in March.

Given her dovish views ahead of her nomination, very few participants may have been anticipating a more hawkish speech than the one Fed Chair delivered on Tuesday. On top of that, in a separate event, Chicago Fed President Charles said that the current projection of three hikes this year is “a good opening bit,” but added that “it could be four if the data don’t improve quickly enough.”

Philadelphia Fed President also talked about a March lift-off, after San Francisco Fed President Mary has done so on Wednesday. Yes, Fed Chair Powell also declared willingness for tighter policy when he testified on Tuesday. Still, he refrained from commenting on a specific timeline, while he mentioned that officials would need some time before agreeing on the balance sheet reduction process.

That’s why stocks edged north in the aftermath and continued doing so the following day as well. This time, remarks were more hawkish, with several policymakers supporting a March hike and mentioning the prospect of four hikes by the end of the year. That’s why equities slid.

But why did the dollar keep sliding instead of rebounding? This appears to be a mystery for us. Maybe because there were some key technical breaks in the last couple of days of the US dollar against its major counterparts.

For example, exited the sideways range it had been trading within since Nov. 26, and then, it emerged above the downside resistance line drawn from the high of May 25. It could also be that market participants are afraid that if rates rise too fast this year, they will probably slow down later.

In any case, with Fed officials entering a “blackout” period next week ahead of their Jan. 25-26 policy meeting, we believe that the dollar’s faith will depend on economic data. Numbers pointing to a stellar economic performance may eventually encourage participants to buy greenbacks again.

The German cash index traded lower yesterday after it hit resistance near the 16075 barrier, marked by the high of Jan. 12. However, the decline was paused near the 15860 zone, and then the index rebounded somewhat.

Overall, DAX has yet to confirm a forthcoming lower low, and thus, we are reluctant to call for further declines for now. Also, with the ECB among the major central banks, which are expected to refrain from pushing the hike button this year, we see decent chances for a rebound.

A clear break above 16155 could confirm the case and encourage participants to push the action towards the record peak of 16300, hit on Nov. 19, and approached on Jan. 5. If they are unwilling to stop there and decide to enter the uncharted territory, we could see them climbing to the psychological number of 16500.

To start examining more significant declines, we would like to see a clear dip below 15665, support marked by the low of Dec. 27. Such a move would confirm a forthcoming lower low and may allow declines towards the 15520 zone, marked by the inside swing high of Dec. 21, the break of which could target the low of the day after, at 15425.

USD/JPY fell sharply the last couple of days, breaking below the upside support line drawn from the low of Dec. 3. The fall was temporarily paused today near the 113.63, after the test of which the rate rebounded somewhat. In our view, the latest sharp fall and the break below the upside support line may have switched the short-term picture to negative, at least for now.

Even if the rebound continues for a while more, we see decent chances for the bears to retake charge from near the 114.22 zone. They could dive for another test near the 113.63 level, the break of which would confirm a forthcoming lower low and may initially target the 113.30 territory, which acted as strong support between Dec. 8 and 20. If they are not willing to stop there either, we could see the fall extending towards the low of Dec. 6, at 112.85.

We will start considering the bullish case again upon a break above the 115.45 barrier and the downside line taken from the high of Jan. 4. This could initially target the high of Jan. 11, at 115.70, the break of which could carry extensions towards the peak of Jan. 7. If the bulls are not willing to stop there, we could see them targeting the high of Jan. 4, at 116.33.

As for Today’s Events

During the early EU session, we already got the UK monthly for November, as well as the and production rates for the month. The GDP accelerated to +0.9% MoM from +0.2%, while the IP and MP rates increased by much more than anticipated.

In our view, this adds some credence to market expectations over another rate hike by the BoE very soon and some more throughout the year.

In the US, ahead of the opening bell, the earnings season kicks off with Q4 results from several large banks, including JPMorgan Chase (NYSE:), Citigroup (NYSE:), and Wells Fargo (NYSE:).