On Friday, Jan. 21, stocks fell sharply, with the dropping by 1.9% and the falling 2.7%. Now some of the declines towards the end of the day seemed to have had a lot to do with options expiration.

I had looked through the open interest levels in the SPDR® S&P 500 (NYSE:) Friday afternoon. In the chatroom update board for subscribers, I noted that the most significant open interest levels left on the option board were on the puts down at the $440 level, and that area was likely to be tested. Well, sure enough, the SPY closed at $437.98.

It was no surprise; once they were in striking distance, it only made sense for the market to drift down there to salvage the value of the puts and close them in the money. So with that said, it would not be surprising at all if the market gapped higher on Monday morning and saw the S&P 500 rise back to 4,400. But resistance will be extreme, around 4,440, so I would expect that level to hold as resistance.

But what seems more amazing to me is how so many people on Twitter and YouTube suddenly called the sell-off and were explaining the levels where the S&P 500 was going to go to, and what their models and counts were explaining. Based on what I have seen, none of them know what is going on.

Look, the market is dropping because it was repricing due to the enormous potential changes coming in monetary policy. It is not a garden variety correction, where support levels will be found at moving averages, with markets testing things, or some magical count or pattern that no one has ever heard of.

The market is moving down because valuations are too high, and real yields are rising as the Fed pulls away from suppressing those rates. So the best tool you can use to figure out the equity market is by watching real yields. Sure, technical help tells us where the market may pause or rebound, or where the next turn will be. But there is nothing magical about a moving average; sometimes they work, and sometimes they don’t.

As for indicators, many show the market as oversold, but that doesn’t mean they can’t become more oversold. So be careful. The higher rates go, the more the market will sell off; there is nothing else to it.

Now that I got that off my chest, the Fed will be the determining factor as to what happens next. I don’t see how the Fed can walk things back now; it is too late. The Fed needs to do something to try and get inflation under control, and the market, by rising and rising, gave the Fed the green light to go ahead. The market has dug its own grave. Sorry.

Ultimately, I think this week could end badly once we get past the and that the market won’t be happy with what the Fed has to say. I can see the S&P 500 trading between 4,360 and 4,440 through Wednesday afternoon. Then after Powell has his and the market realizes the Fed dumped it and decided to start dating inflation, the market will have a meltdown and start moving back towards 4,190. 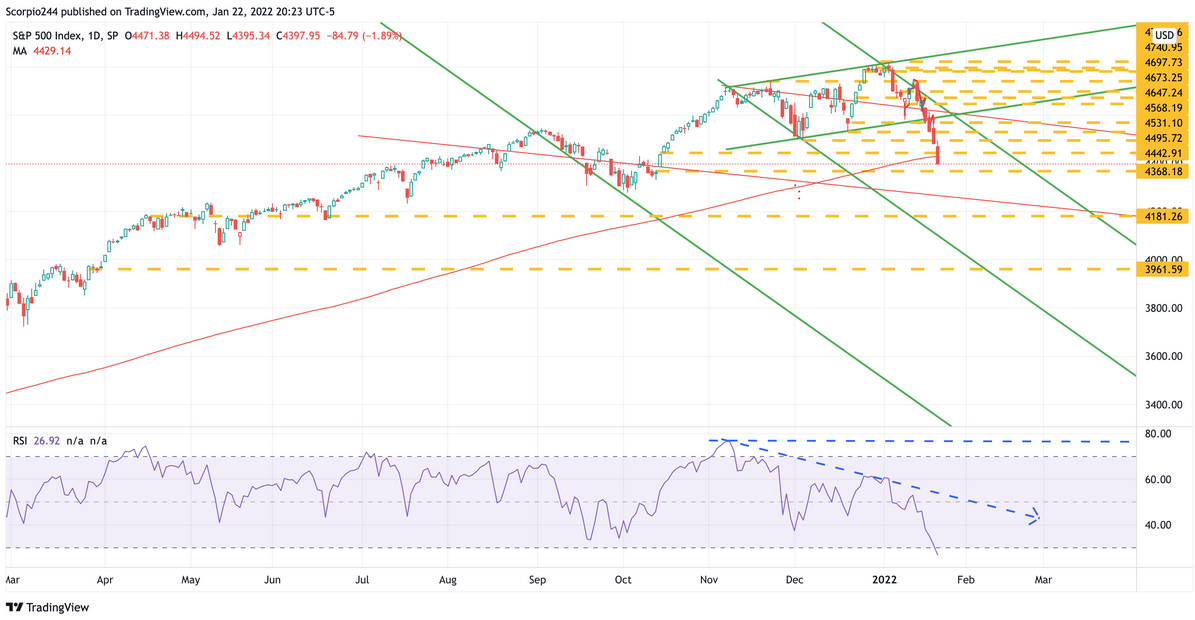 Real yields have already broken out, and if the Fed says anything on Wednesday that rates will be rising and talk about letting the balance sheet run-off, real yields will keep rising, and there is no bouncing back for the S&P 500 or any market if that is the case. Valuations in the stock market are too high.

Amazon.com (NASDAQ:) exceeded my expectations on Friday and was smashed another 6% to close below $2,900. Anyway, dead money no more; now it is just deflating because this is a company likely to face rising costs and as retail sales are weakening too.

While it may have been a great investment for many years, the environment has become less favorable. Again, I have been telling everyone this stock is dead money for months, and when growth companies report earnings that miss expectations and then guide below estimates, they become dead money.

The only thing that turns this stock around is a massive beat and better than expected guidance when they report results, and I don’t see that happening this quarter. Good luck… 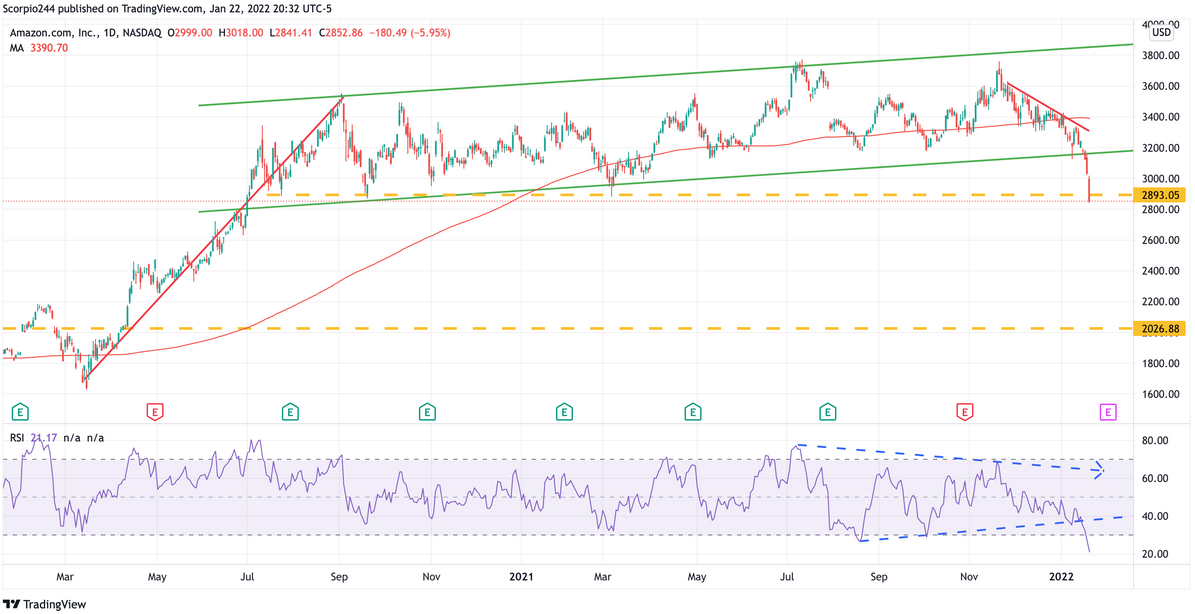 Roku (NASDAQ:) finally hit $150, and nothing would make me happier than to see this stock go back to $102. I warned everyone about this stock for more than a year, explaining it was not a disruptor, was in a competitive space, was nothing special, and was way overvalued. Like the Amazon shareholder base, the Roku base harassed me, called me names, made fun of me endless, and in the end, I was right. Good riddance. 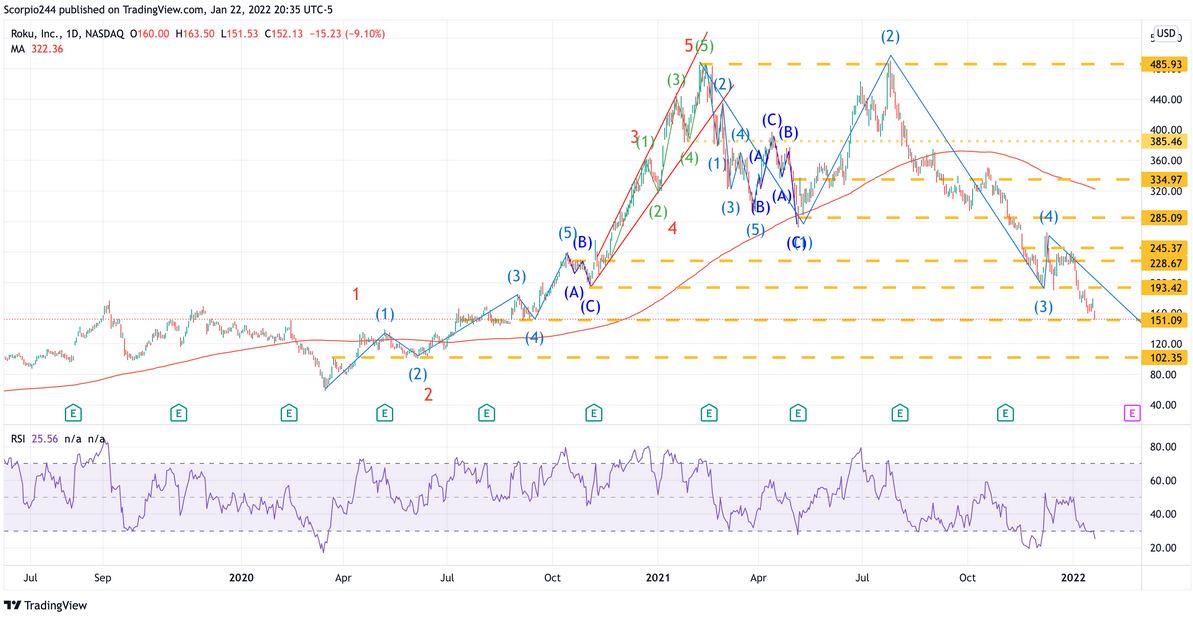 DocuSign (NASDAQ:) is another stock getting crushed and is likely not finished falling yet, with $102 also in its sights. 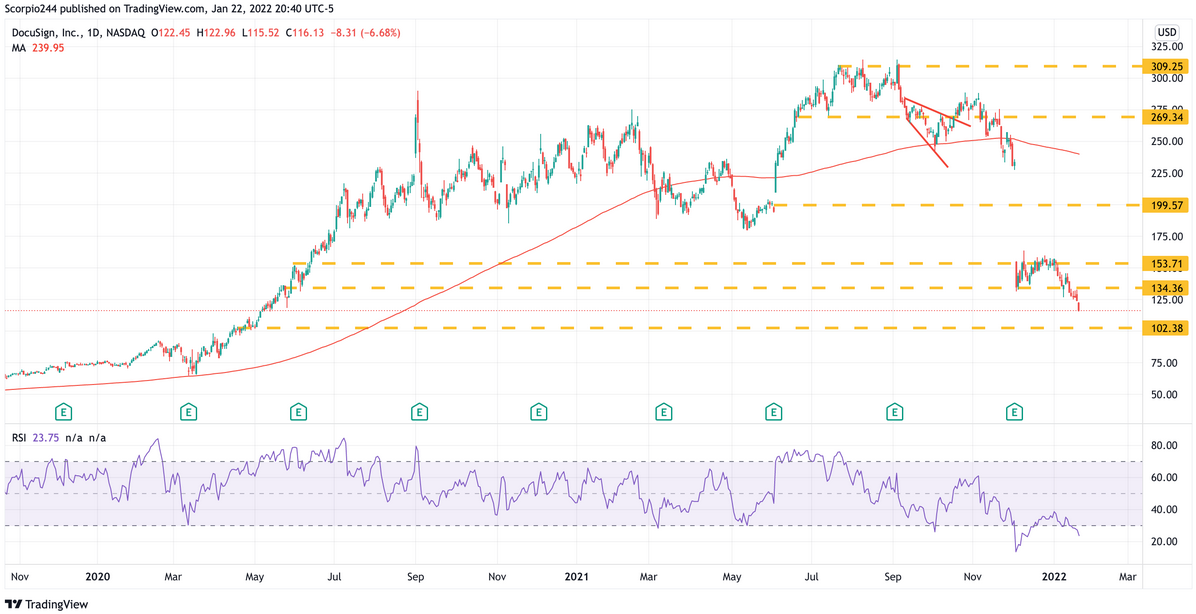 PayPal (NASDAQ:) shares fell 5% on Friday, with the stock dropping to support at $163. Once that level breaks, the gap will likely get filled at $130. 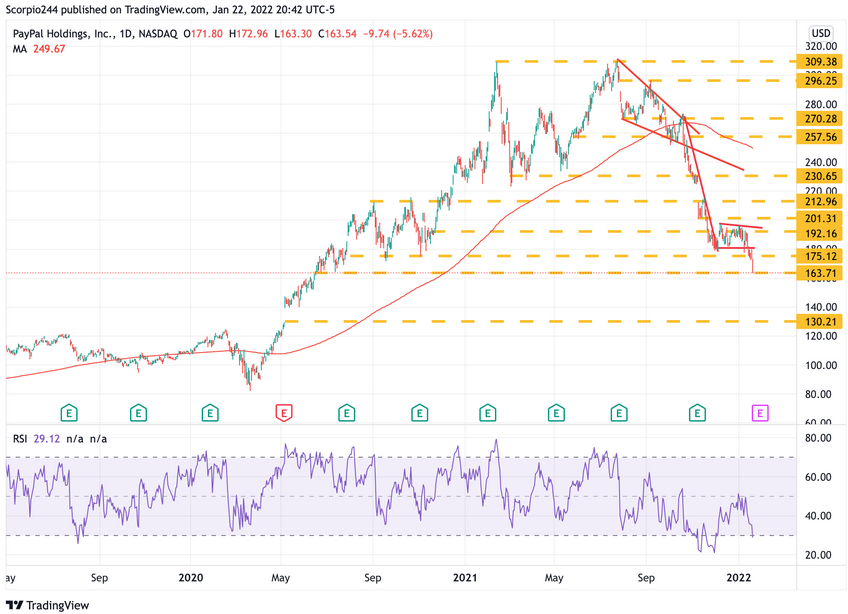 Shopify (NYSE:) was also smashed on Friday, dropping nearly 14%. The stock is now sitting just above support at $870. It is a considerable level for Shopify because once it breaks, nothing stops it from falling back to $700, and more likely $600, which I calculate to be fair value for it based on price to sales. 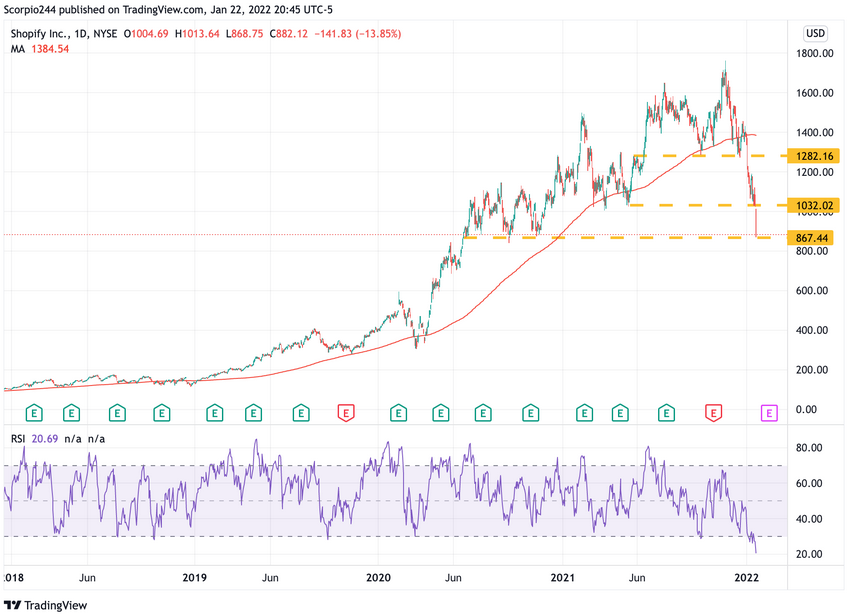