Gold is following a logical path in 2022

Reference this article posted on 12.30.21: has done nothing unusual and in fact it has done as would normally be expected. In February it began to rally out of the base on the daily (futures) chart below. Driven by war (easy on the war, terror and pestilence bull rationales dear gold bugs) and inflation hype, kneejerkers and momos (momentum players) quickly jumped on pushing gold to an overbought high on March 8. The resulting correction is normal and it is healthy. Momos are not allowed to participate in a real gold bull (at least not until later when the bull is obviously blowing off).

As you can see on the chart, gold found support at the first projected level (this chart was used in an NFTRH update on Wednesday) to possibly contain the downside. However, as also noted in the update, better support is below at and around 1834 and the 200 day moving average. Still below short-term resistance, that lower support is still well in play at this time. 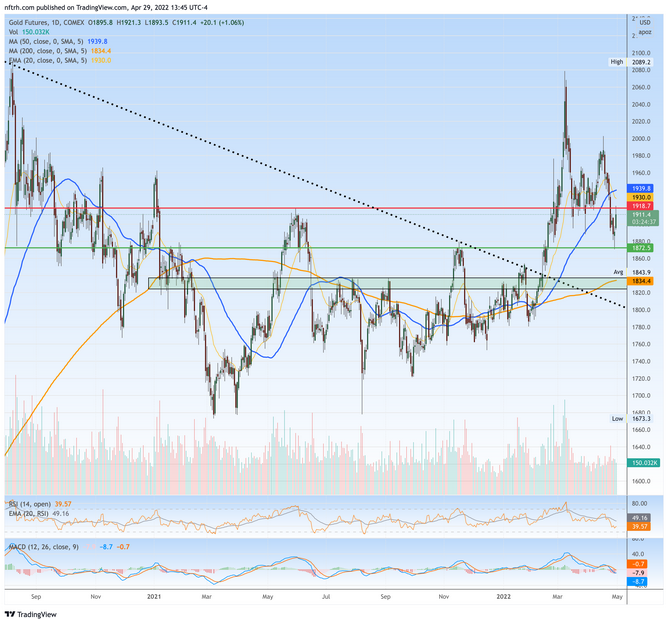 This technical picture of a correction is within a fully intact big picture situation. The monthly chart’s bullish Cup is still in handle breakout mode and will remain so even if/as gold drops to our main support area as noted above. The supportive EMA 20 is also rising to that junction, which includes the handle breakout point (dashed line) as well. It’s not only normal, it is a near perfect picture if, like me, you would want to see gold unload the inflationists and momos before the next leg up.

Side note: As I continually stress, gold can do well in an inflationary environment, but it will do relatively worse than cyclical commodities if said continues to work toward a positive economic cycle. The cycle inflated by the Fed and its fellow central banks out of the 2020 pandemic disaster has been cyclical, like it or not. But I think that is changing in 2022, either to a more virulent and economically corrosive Stagflation or more likely in my opinion, a disinflationary or deflationary event of some kind. 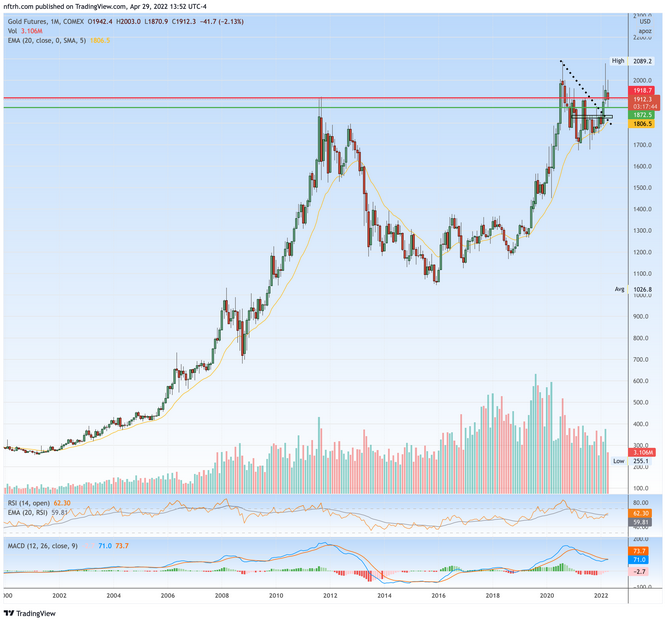 As for the gold miners, please remember that they fundamentally leverage the gold price on the macro. When gold is declining vs. gold mining cost inputs (as it generally has been since we noted the need for a correction in mid-2020) the sector’s fundamentals are pressured (e.g. Gold/ ratio is in the tank). Certain macro indicators are, however, more constructive. But today let’s remember that it is a time to unload the momos in preparation for another leg up, possibly coinciding with gold’s seasonal turn to positive later this summer.

It’s not always a good time to buy gold and it’s often not a good time to buy the miners. But to this point in 2022 I see no reason to stow away my own cheerleading. The picture is on track and waiting for a nice combination of sector/macro fundamentals and a resumption of the bullish big picture technicals.